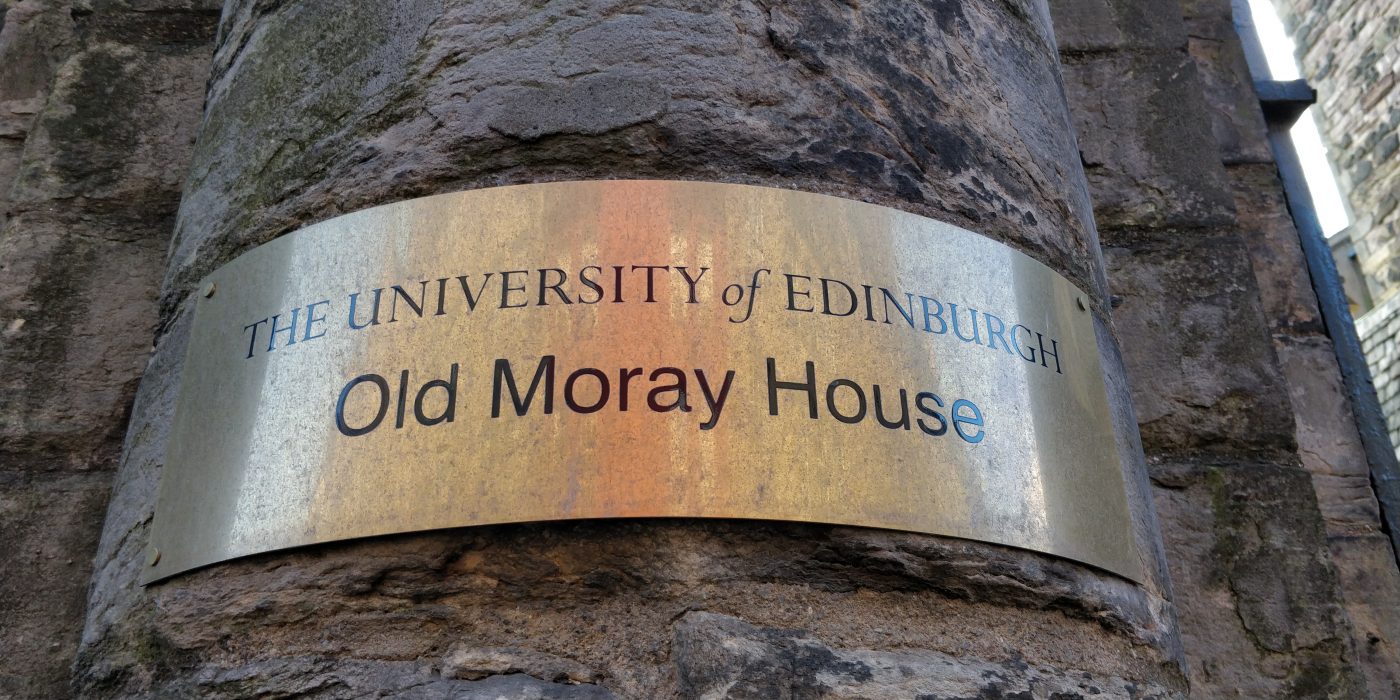 I’ve been seriously neglecting my PhD posts so I’m going to do a speed catch up over the week, starting off with the official start date: 1st October 2018, Induction Day. As I’m an unofficially distance student it was great to get to Edinburgh for this but I wondered how much would be relevant to me, unable to avail of many of the things on offer. However, it turned out to be informative, fun and full of a real mix of people. It was also a tad odd to be back studying physically in Edinburgh after a gap of a couple of decades – I spent three days wandering around spotting what was the same and what was different (more was the same than I would have guessed). My old undergraduate haunt was away from the main site at King’s Buildings or KB as we knew it (for science-y types) so I had never been at the Moray House, School of Education, complex before. It was nestled, hidden way, off the Royal Mile with a wonderful central garden courtyard surrounded by several old buildings to get lost in.

The next day, was another first, supervisor meeting number one. It was pretty strange to have a meeting about a proposal that I realised I had written a full year beforehand (getting through from proposal to acceptance is an endurance feat in its own right and surely medal worthy!). Was it still relevant, still topical, still interesting? At this point it seems appropriate to rewind back to October 2017.

I was five modules into the Digital Education programme and becoming increasing disenfranchised about education technology in the wider sense due to the steadily encroaching digital capitalism and ever more prevalent day to day surveillance. I was working in the main within undergraduate medical education and had experience of going through professional accreditation with both the Higher Education Academy (now Advance HE) and CMALT. I wanted my topic to not only be closely aligned to my work but of wider relevance and something that I was personally interested in, enough at least to survive working on it for the next five or six years.

Crunching all this data through my internal (messy) decision making process the single topic that came out the other end was ‘reflective practice‘. This satisfied all the above and worked nicely into a topical proposal, tick tick and tick.

My proposal discussed the concerns around performativity (Ross, Macfarlane), lack of formal teaching/training and reducing assessed reflection to a tick box exercise (Hodges, Ng et al) in order to fulfil professional bodies requirements. This is a small section of my proposal which covers what I had chatted with students about over the years; no matter how much the literature extolled the benefits students and indeed staff were far from being fans. This is essentially what I would like to drill down into and explore over the coming years. The how exactly will take some time to work out though. The paragraphs below were a small section of my proposal.

Much of the current literature around reflection in undergraduate medical education focuses on the benefits of reflection and is driven by technological determinism, in that electronic systems, eportfolios, can bring efficiency and ease of use for both students and teachers. However, critical articles are fewer in number which is in contrast to anecdotal stories that can easily be found online recounting a distain and indeed hatred of reflective practice and eportfolios. An example from the Student Room, What to put in the eportfolio is indicative of these.

Indeed, the results of the entanglement of the eportfolio, assessment and reflection are highlighted in the post, The ePortfolio and generation Y (Pathiraja, 2012). Her post together with the comments tell a sorry tell of the state of reflective practice in healthcare.

So back to meeting one, the big question was whether my two supervisors still agreed one year on that it was worth researching. Thankfully, they did. Big picture reflective practice in medical education was a goer from my proposal. Now for small picture – what exactly? Which avenue was I going to hone in on? What were MY thoughts on the topic? What was the landscape in the literature? More crucially, what the heck was my overall plan. Gone were the learning outcomes, gone were the lovely neat and tidy topic/week headings containing lists of suggested papers/chapters/books/articles, gone was the discussion forum with fellow students studying the same topics. This is definitely going to take some major readjustment and rethinking on my part. For now I am going to get mileage out of the high of not just getting to the starting line, but actually off and running.

Have had the best three days in Edinburgh for work & study. Am now a fully inducted #phd student & also met many Twitter folk irl inc @jar @timbocop @CMSinclair @claraoshea @Stuart_EBS @ammienoot @SusanMGreig. Thanks for all the kind hospitality #NowExhausted pic.twitter.com/TjAaIzmo5v

It was fab to see the #mscde HQ in the physical sense but even better was meeting up with several Twitter folk in person. In just three days I squeezed in as many coffee shop/lunch meet ups as I possibly could putting faces to names(avatars). Writing this up I realise that I am woeful about taking photos of people – I didn’t take a single one despite the vast number of moody buildings and skylines filling my phone. I really, really need to correct that on my next visit.

Macfarlane, B. (2016). Freedom to learn: The threat to student academic freedom and why it needs to be reclaimed Taylor and Francis.

3 thoughts on “Gearing up for my PhD: Induction”