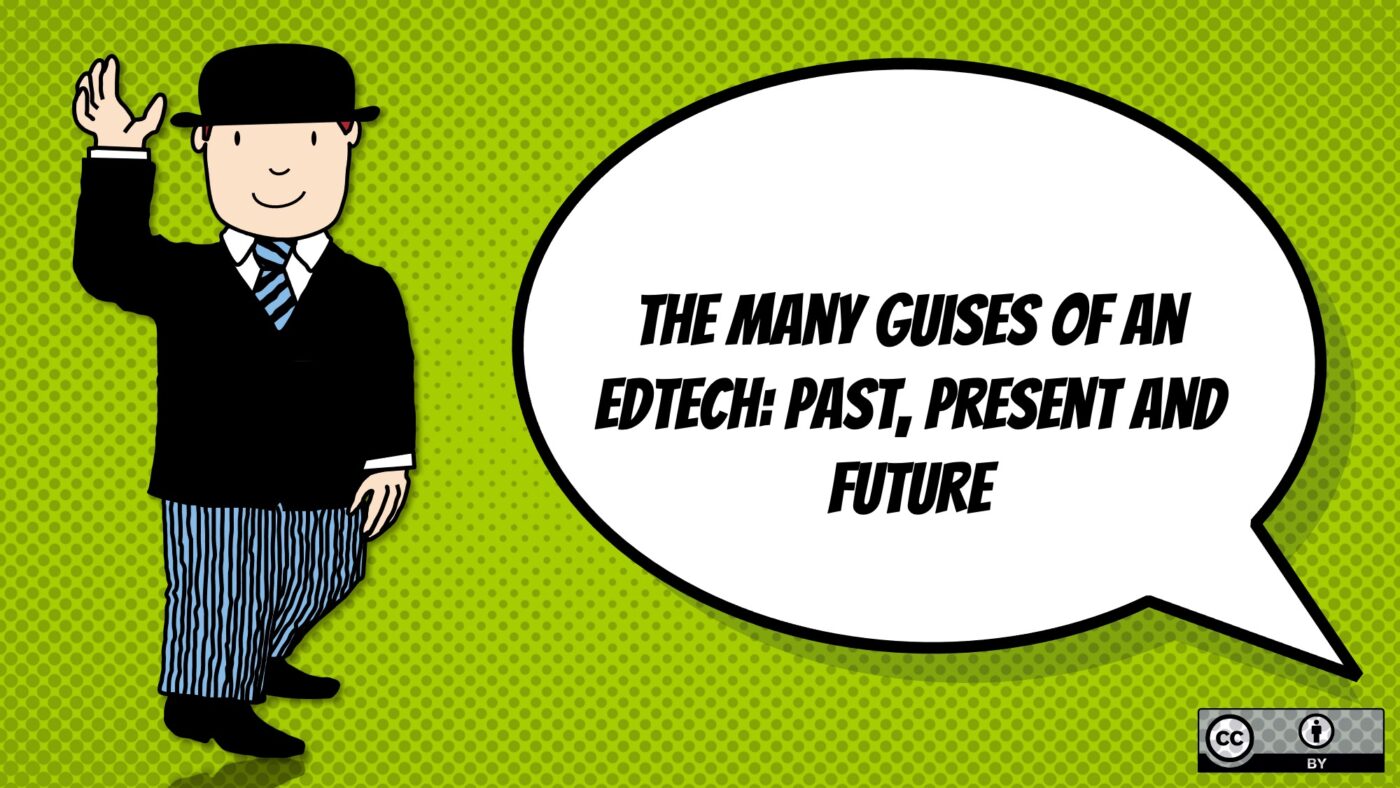 I’ve finally got my slides and approximate transcript together for my first ever Gasta talk (5 mins and not a second more), delivered at the EdTech 2021 conference at the end of May. Thanks to Tom Farrelly, the Gasta Master who chaired the session and ensured it was a fabulous experience in a packed Zoom room. Enjoy my wee trip down memory lane.

Transcript of the five minute talk

Note: this is made from memory not from the recording of the session

The Many Guises of an EdTech: Past, Present and Future

Hello, I’m Clare Thomson and I’m a Digital Education Consultant at Ulster University and you can find me on Twitter @slowtech2000 and I’m really here for the craic because I’ve never been on this side of a Gasta session before.

So even before COVID I always dreaded the question ‘So what do you do?’, as I’m sure many of you here today will have similar experiences of. Given the complexity of our roles, the diversity of the backgrounds we come from and the many misunderstandings of what we do with colleagues never mind friends and family, make it such a difficult question to answer. So, taking time to reflect over the last year considered what deep, complex critical lens I could use to do this, and I decided on … Mr Benn.

So, for those of you who aren’t of my vintage, Mr Benn was this cartoon, a staid businessman who had lots of adventures by visiting a costume shop and dressing up as different people and it was first televised in the early 70s.

So first we the clown. He sees circus folk stopped at a bridge which had collapsed and they were all fussing around the broken bridge without having any success in fixing it so he suggested they actually work together instead and once he gets their spirits raised they all begin to work together and successfully fixed the bridge. To me this is really what encapsulated my time as an educational technologist throughout Covid. Many teaching colleagues were stressed, overworked and really daunted by the thought of fully online teaching and a lot of my sessions were about being calm and calming them and telling them it was all going to be fine. In the same way, I was brought in as technical support into many sessions with students and staff and really once I was in there, I spent most of the time talking inanely on the microphone and welcoming people into the session and making it a warm space and getting the chat going by asking questions as well. Being an all-round entertainer.

As the wizard Mr Benn is asked by a queen to change her husband’s appearance feeling he is not kingly enough, luckily Mr Ben convinces her though that looks aren’t actually important. This makes me think of the VLE when many colleagues would prefer that we had something a lot more aesthetic than we do and actually it turns out internally and beyond that students’ feedback tell us that they really want and need consistency of layout, they want structured navigation, they want signposted content, they want clear communication and to be able to find things quickly and easily. I have yet to see student feedback to the ask for a prettier VLE.

So as a zookeeper Mr Benn helped animals in the zoo improve their accommodation because he got the town folk to see that the cages were too small and again thinking about the VLE, it was really getting staff to think about that space and not to be constrained by just putting their PowerPoints into the container but really to think about the platforms and systems that worked well with the VLE and integrated with it but which then accommodated collaboration, communication and socialisation for the students beyond the repository system.

As a diver Mr Benn helps king Neptune and his mermaid friend to outwit crews of two submarines who are trying to photograph the kings pet sea monster and this makes me think back to the conversations I had with staff who were frustrated that students weren’t turning on their cameras. I have talked about this internally and on Twitter about the need for it to be a choice for students; they were in a situation that was unknown, they were in their own private space and homes and it was about giving them the choice and also getting staff to rethink what engagement meant to them and prompting them to think that the chat box actually was just as rich a means of engagement as turning on their microphone.

So what’s the serious side of this talk then? It’s about learning and looking to the future of our profession of educational technologists and I think that raising the levels of the professional accreditation such as AdvancedHE fellow or CMALT right across our profession would really be a significant step forward. Listen back to Lisa’s Gasta from yesterday which is excellent about AdvanceHE fellowship. Also, just as we would like all our academic colleagues to have a minimum level of digital awareness and literacies I think we then need to be able to say that we all have teaching and research training at a minimum level; again across the whole board. Lastly we need to look carefully as we create future job specifications and interview questions that we look for care in people, that we look for compassion and for empathy because if we’ve learned anything over the last year it’s that these skills and attributes are absolutely essential and just as important as core competences and technical skills.

And this is Mr Benn and because of copyright he was made with PowerPoint shapes in order for me to be copyright clear and as you can see he’s here deconstructed in all his shapes glory. Thank you for listening.

Credits go to all things open; the slides template was from PowerPointify, the photographs I found on Pexels.com and Pixabay.com and the text came from the Mr Benn article on Wikipedia.